If you have a question that we haven’t covered here, please contact us >>
What are the safety precautions?

We have life jackets for everyone, are in constant contact with local coastguard radio and, due to the busy location, a massive number of fast boats regularly travel in the area. The Lady Clare has a P5 License which means it’s regularly inspected to ensure it’s suitability to make the trip. Our crew have 35 yeas plus of boating experience. Please note that weather conditions can change during the trip.

Please view this safety video from the OPW before you arrive at the island.

What information is provided?

We provide a comprehensive overview of the geography of history of the the local coastline. The history of the Skelligs as a monastic settlement. Locations and history of ship and plane wrecks in the area. Details of the local wildlife including the puffin population on Skellig, the gannets on Small Skellig and the birds and mammals that inhabit this coastline such as seals, dolphins, minky whales, humpback whales and basking sharks.

Is the Eco Tour suitable for children?

We highly recommend our Eco Trip for children of all ages. Children generally adore being out on the sea and seeing the local wildlife up close. There is nothing so exciting to a child as dolphins racing the boat home.

In the interests of safety, we do not take bookings for children under 10 years of age for our landing trip. However, the Eco Tour is safe for children of all ages.

On all our trips, parents must make sure that children observe the safety regulations at all times while aboard.

What types of wildlife will we see?

The types of wildlife we see are broken down in to guaranteed, usual and wonderful surprises.

Large numbers of birds are always available. Gannets, in particular, are hugely plentiful in the area as they breed in their thousands on Small Skellig. Gannets dive bomb their prey so, on occasion, you can see flocks of gannets dive bombing a patch of sea containing fish that are close to the surface.

Puffins are visible between the months of April and late July. After that, they migrate to the middle of the ocean.

Dolphins are not guaranteed but are an increasingly common sight recently. Especially since a mother and calf have made Skellig Michael their home in the past few years. There are also large pods of dolphins in the area who often escort the boat part of the journey out or back.

Basking sharks can sometimes be seen in late April or early May as they migrate up the coastline. Though monstrously large, they are entirely harmless as they only eat plankton.

In the past year, we have had one incredible new addition to the local fauna. A school of humpback whales have migrated through the area last September and were observed feeding and breaching in the area. A rare and absolutely magical sight for anyone lucky enough to witness it.

But, even on the quietest day, you will see lots to hold your attention and your camera’s focus, if you bring it along.

How long is the Skellig Michael Eco Tour Cruise?

In general, about 2 and a half hours. We’ve provided a representative itinerary above. If fishing or wildlife is particularly good we may prolong the trip by a few minutes, provided everyone is happy to continue.

Yes! We are one of only 15 licensed boats that are allowed to ferry passengers to Skellig Michael. Landing tours are restricted to 12 persons per boat and depart every day that the weather permits. Landings are only allowed on the island from May 15th to October 2nd each year. Booking ahead is essential due to the massively increased popularity of visits to the island over the past number of years and the limited number of visitors allowed each day.

For those who do not wish to land or are unable to do so because of unavailability, we also run a Skellig Cruise at 2pm and 5:30pm each day. This trip circumnavigates the island from the water and covers a lot more of the coastline and local attractions than the standard boats that ferry passengers onto the island. These trips also typically can be done on days that boats are not landing on the island. If you can’t get a landing trip for the date of your visit or the weather doesn’t permit a landing or you just want to see the islands up close and the rest of the harbour and wildlife, then this is the trip for you.

What times do the boat trips to Skellig Michael depart from Portmagee?

The boats depart from Portmagee visitor pontoons in the centre of the village at 9am. The trips are sea and weather dependent so subject to cancellation at short notice. Please check with reception staff at The Moorings at 8 a.m. on the morning of departure or phone +353669477108. Please be aware that the boat will not wait for late arrivals, so it is advisable to stay in Portmagee the night before your trip

How much does the landing tour cost?

€120 per person, payable in cash to our representative at our ticket collection point in the reception of The Moorings Guesthouse. Tickets must be collected and paid for at reception between 8 a.m. and 8.45 a.m. Due to the extraordinary demand for access to the island, pre-reserved tickets not collected by this time will be released and the seats will be resold. Please note: There is no ATM in Portmagee.

The Eco Tour around the island costs €45  per person, payable at the Moorings Hotel.

How long is the landing trip?

The boat trip out to the rock takes approximately 45mins. Boats generally depart from the rock about 2 and a half hours after landing, arriving back in Portmagee by 2 pm / 2:30pm.

Is there anything I should be aware of prior to departure?

There are no toilet facilities available on the island. Our boat, the Lady Clare has toilet facilities, if needed. Please be aware there is no food or drinks available to buy on the rock so if you would like us to provide you with a packed lunch, please order one from The Moorings Guesthouse, +353 66 9477108, the evening before your trip.

What should I bring with me?

You’ll need warm and comfortable clothing worn in layers and it would be wise to bring rain gear to protect you on the open boat. Bring water and a sandwich or snack to have on the island. Footwear appropriate to climbing 660 stone steps would also be recommended.

When is the best time to see the puffins?

The puffins nest on the rock between early April and the end of July. 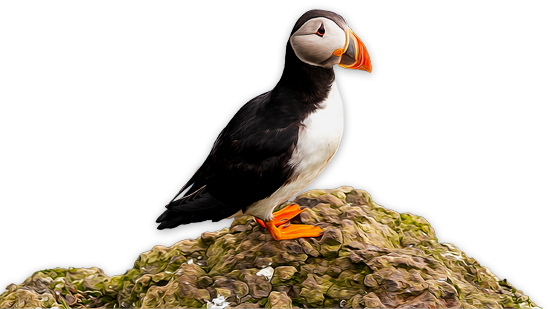 We use cookies on our website to give you the most relevant experience by remembering your preferences and repeat visits. By clicking “Accept All”, you consent to the use of ALL the cookies. However, you may visit "Cookie Settings" to provide a controlled consent.
Cookie SettingsAccept All
Manage consent

This website uses cookies to improve your experience while you navigate through the website. Out of these, the cookies that are categorized as necessary are stored on your browser as they are essential for the working of basic functionalities of the website. We also use third-party cookies that help us analyze and understand how you use this website. These cookies will be stored in your browser only with your consent. You also have the option to opt-out of these cookies. But opting out of some of these cookies may affect your browsing experience.
Necessary Always Enabled
Necessary cookies are absolutely essential for the website to function properly. These cookies ensure basic functionalities and security features of the website, anonymously.
Functional
Functional cookies help to perform certain functionalities like sharing the content of the website on social media platforms, collect feedbacks, and other third-party features.
Performance
Performance cookies are used to understand and analyze the key performance indexes of the website which helps in delivering a better user experience for the visitors.
Analytics
Analytical cookies are used to understand how visitors interact with the website. These cookies help provide information on metrics the number of visitors, bounce rate, traffic source, etc.
Advertisement
Advertisement cookies are used to provide visitors with relevant ads and marketing campaigns. These cookies track visitors across websites and collect information to provide customized ads.
Others
Other uncategorized cookies are those that are being analyzed and have not been classified into a category as yet.
SAVE & ACCEPT
×
×